Not what she was expecting 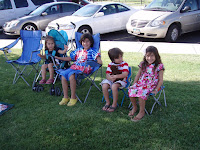 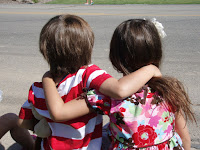 Summertime is parade time here in Utah. We were lucky enough to return home in time for our city’s festival which is called “Highland Fling.” For the last 4 years I have had a kid in the baby contest, and this time was the first time that I didn’t have a baby participating. Later I found out there was no baby contest this year after all, but oh well! I was still sad my baby-contest days are gone. Sniff, sniff.

Well, Last Saturday we were up early for the parade, and like every year we have a blast. The kids love eating cotton candy (the ONE time in the year they do), 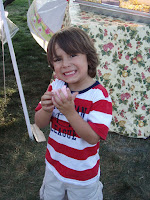 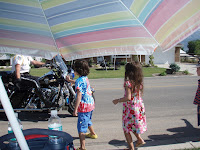 BYU’s mascot was there at the parade. My little Chubbers saw the kids go crazy with excitement (we are a truly blue city. We have the random Ute, but here we’re mainly Cougars!) and she ran because she thought the truck must be throwing a TON of candy. I saw her running happily, ad then stop in her tracks to turn back frantically and ran back to me because she was terrified of Cosmo! My Gorgeous Boy and I couldn’t stop laughing. We laughed so hard we were crying, and then maybe a few of those tears of mine were due to the fact that my boy is old enough to feel sympathy and look condescendingly on his siblings. He’s my little friend. He tells me jokes, and we look at each other rolling our eyes when Swan says a random thing. When did he grow so fast? He’s only 8, but since he’s my oldest, he acts like he’s much older. And then at Costco I have to take away a penny he was using to torment his sister, and I have to tell him off for speaking like Stitch, from Lilo and Stitch, because oh boy! How annoying!
Our Highland Fling. A day of summer that’s become a marker in our lives. How long until Jeff can celebrate it with us again? 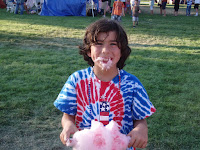 One response to “Not what she was expecting”