The curse of the wasp 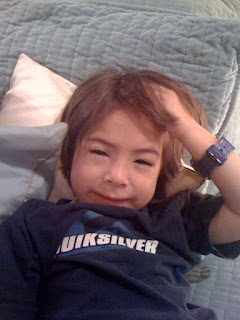 This picture was taken last night, after his visit to the ER. He’s trying to smile …

I had never been stung by a bee until about 5 years ago. I was at the park with Gorgeous and Swan; it was just the two of them back then, and they were having a blast in the playground. I was reading (what else?), and I felt something on my leg, inside my jeans. This was September, and the weather had already turned cooler. It was a wonderful early Autumn afternoon, and all of a sudden, I felt fire burning my knee. I knew, I don’t know how, that a bee had gotten inside my jeans and had stung me. I bunched up my jeans to crush the bee, and then I rolled my pants. There it was, the black and yellow culprit all smashed up. I wasn’t allergic to the bite, and ever since that time, every Summer I have an incident with either wasps or bees.

There was the one time the kids were playing in the backyard and Swan was viciously stung in her armpit (!) three times. That same week J., G’s son, was playing at home and was stung by a wasp too. The only time in his life he’s ever been stung.

Last Summer Chubbers was playing barefooted, and she stepped on a bee, which of course, stung her too.

Ah! But the best (or worst depending how you see it) was when the guy who does our yard was pruning the bushes which had grown “preternaturally” (like Anne Rice likes to say) and was stung by wasps all over his arm and … I can’t say it! INSIDE HIS NOSE. Ouch!

So, I’m a little paranoid about bees and wasps, but when El Cangri told me yesterday that a bee had stung him on his finger, I went to the medicine cabinet to get the homeopathic remedy for “bee stings” (Apis M.), and washed his hands. His little right pointer finger was stiff and swollen and red. A red hole was the evidence of the sting. I put some anti-inflammatory oil and went back to planting flowers. Yes, on a Sunday, but they were going to die if I waited one more day.

El Cangri started complaining that his face hurt, and when I turned around to look at him, I saw him riding his trike, his eyes a mere slit. He kept saying, “I want to go take a bath!” I took him inside to wash his face, and that’s when I noticed the hives. It was like his skin was bubbling as it became covered by bright red welts. He even had hives on his scalp. I felt a distinct voice on my mind say, “Go to the hospital. NOW!!!!” I immediately called my awesome neighbors to see if the other kids could stay with them.

The neighbors came running to help, and I. took the kids home so B. could come to the hospital with me. By then El Cangri was wheezing, and he couldn’t see at all. I had given him one teaspoon of Claritin before we left, and I’m convinced he made it to the hospital because of the Claritin.

The ER was packed, of course! But they took him in right away. The doctor took a look at him, and he ordered an IV to be placed and a cocktail of medicine to go in it. My poor baby looked so small in his superman cape on that hospital bed! But, he’s such a brave boy, he didn’t even flinch when he felt the IV needle on his arm.

I’m so grateful B. was there with me. I felt I was having an out-of-body experience, and today I have been very weak. My body and mind respond to emergencies by blocking out things. I could hardly speak, in either English or Spanish. B. was there though, making sure everything was OK.

A while later, the swelling went down, and he was breathing well. His heart rate was stable, and they sent him home. We carry those miraculous epi-pens now, just in case. If this is how he reacted to a very first sting, I shudder to think of a future sting.

I took him to our doctor today, to discuss plans for the future, what treatments are available, what to do if there is a next time. When we went to the pharmacy for his medicine, he saw a little “kolala” (how he called it) bear, and it was love at first sight. He named him “Sting.” I wonder what goes through his mind. What he thinks.

His face was still VERY swollen this morning, and I overheard him telling his older siblings, “Yes, I look different now, but everyone is different, right?” All day I caught him looking at himself on the mirror. My child; he’s so vain. He loves his face. Today I saw his worried expression, and he asked me if he was ever going to be pretty again. Lump … He’s so tenderhearted and beautiful. I love him so much! Of course, my kid who LOVES bread is the one with the wheat allergies, and the one who loves to play outdoors is the one with wasp allergies. My sensitive little guy. What am I going to do with him?

What good will come out of this? For now, my appreciation for my rowdy four year old. For happy laughter coming from the trampoline and the swing set. The gift it is to be oblivious of insects when you are out in the yard, or taking a walk around the neighborhood. The blessing it is to have older siblings who love their little brother and cry, “The vaccine, the vaccine!” meaning the epi-pen because we were out having a tea-party and there were little bees outside.

I try not to think of El Cangri’s starting kindergarten next year, or of scouts camps, or the mission. I know, there’s still time! But it goes by so fast! I can’t have him under my skirts (like they say in Argentina) 24/7; I have to educate him and then trust. Trust in him that he’ll protect himself, in others that will remember his allergies, and in Heavenly Father, that He’ll protect this boy who is the light of my life.

6 responses to “The curse of the wasp”