When we were in TX, I was delighted to find out that there was a Sea World in San Antonio. At the beginning of the summer we had thought Jeff would stay in Orlando until August, so the kids already had plans of going to Disneyworld and Sea World every day. So, knowing we could still go to Sea World, albeit San Antonio, made the kids, and me, very happy.
San Antonio is about two and a half hours from Corpus Christi, so when it was time to return home, I booked the flight from SA so we could visit Sea World. 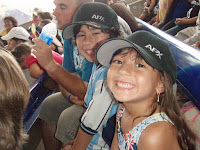 It was a 99+ degree day in SA, and it was crowded. Imagine a legion of tortured looking adults following their delighted offspring into Shamu land. An adult ticket was $56.99 plus tax, and a child’s ticket $48.99 plus tax. So, do the math. For our family it was $309.94 plus tax, just for admission. Ah! I almost forgot! Parking was $25.00 for VIP, which meant you got to park in the first 5 parking rows. Of course, the only available spot we found was in row 5.
But we were going to have fun! We rented a double stroller for $15.00, and I’m so glad we did because it was so hot, and so crowded, the stroller was a life saver for me and the little ones. 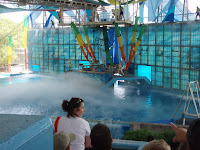 As soon as we went in, there was a show. It was Viva! and it featured an MC clown, who was very funny, and aerialists and synchronized swimmers. It was a Cirque du Soleil kind of show–throw in a couple baby belugas and dolphins. The kids liked it, the venue was very nice (covered, a must in such weather), but VERY short. It was less than half an hour. 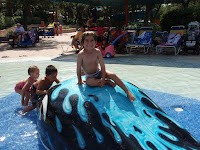 Then, we ran to catch the Shamu show. The walk was a torture, and if I was tanned before, by the end of the day I looked copper. We got some lemon sherbet to cool down a little, and it was $4 the pint. Water was $2. The Shamu show was very emotive. Those wonderful animals are majestic, and the kids shrieked with delight every time we got soaked when the whales splashed the audience. It was a cool show. Again, very short, about half an hour.
By the end of the show we were starving, so we went to a barbecue place inside the park, and when Jeff and the boys came back with the food, Swan and I looked at each other and rolled out eyes. That’s what you get when you are a picky eater. And I had thought you couldn’t go wrong with barbecue … but the chicken was rawish, and I could not force myself to eat it. So I bought chocolate popsicles, at $4 each. That’s $24 for our family.
After lunch the older kids wanted to go on a ride, so Jeff took them to Rio Loco. The little ones and I walked to the kiddy pool in the Lost Lagoon section. The babies loved playing in the water, and I tried not to think of the many un-diapered bottoms soaking in the innocent looking water. I walked over to the waves pool, but it was crowded like a can of sardines, and I was not looking forward to standing shoulder to shoulder with a million other people. 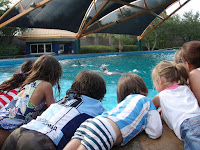 Two hours went by, and when I started worrying about Jeff and the kids, I saw them coming and we miraculously met. Jeff didn’t have his cell phone. Divine providence led us to each other. They waited in line for two hours for a seven minute ride.We could have bought the Quick Queue pass which costs $19.99 per person. We chose waiting. 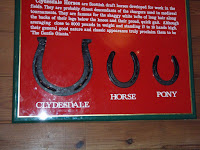 We walked around the park, stopping by the dolphin pool and the Clysdale Hamlet. We terrorized Chubbers at the Sharks/Coral Reef, and by six o’clock we called it a day.
So we spent about $400.00 for a day at Sea World. I know in my kids’ mind the day will become more and more magical as time goes by, but Jeff and I look at each other and wonder, “Was that it?” Total disappointment. Have you ever been to a major attraction like Sea World? What are your thoughts?

3 responses to “Is Sea World Overrated?”