The land of magic

We had spring break last week, or the kids did. After years of wanting to go to Disneyland, and in spite of the San Antonio SeaWorld fiasco of last summer, Jeff and I decided to make the 10 hour drive to Anaheim with a rest stop in Las Vegas. When they heard the news, the kids were ecstatic, probably thinking it was an April’s Fools joke. Even if I had to fly, I’d have done anything to get away from home–there was another snow storm on the way. But the torture of flying wasn’t necessary. Contrary to what anyone might think, driving for hours and hours with your family can be fun. We talked, watched a lot of movies, took naps. Poor Jeff only got to drive, but I think even he had a great time.
We stopped at the JW Marriott in Vegas, where we’ve already stayed before and we all love.

It was Easter morning, and in the packing frenzy I forgot to include Easter treats. On Saturday night Chubbers was bossing everyone around to go to sleep or the Easter Bunny wouldn’t come. 🙁
The following morning I heard a little voice say the saddest words in the world, “The Easter Bunny didn’t come.”
A couple of chocolate pomegranates later she was her happy self again and her enthusiasm kept growing the closer we got to Disneyland.
About two hours before we arrived I was lurking on twitter and found out there was an earthquake in Baja that shook LA for several seconds. We didn’t feel anything, but the memory of that earthquake resonated in my ears throughout the whole week.
Our first night we just walked to the restaurant, enjoying the pleasure of being outside without being bundled up, freezing with cold. There were lots of people coming out of the park. Parents and kids laughing and smiling. Happy. I couldn’t wait for the next morning.
They say that an image speaks louder than words, so here are some images of our Disney experience. 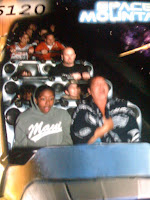 Seeing the look on the kids’ faces when they saw Mickey, Donald, Goofy and Jessie as soon as we entered the park. The hilarity of the Space Mountain picture of Jeff and the kids. Riding on the carousel. Donald, I almost cried when I hugged him. The love with which Chubbers hugged all the characters we met. The magic reflected on my kids’ eyes when the fireworks started. Seeing Stitch, our family’s second favorite character (the first one is Donald). Screaming and laughing at the same time on the fast rides and seeing El Cangri’s terrified face. Feeling like a kid again. Meeting a lot of friends on spring break too. Staying up until midnight to get into the most popular rides.
Priceless. Disneyland really is the land of magic, where parents and kids can play and laugh together, just like Walt Disney envisioned.
Will we go back to Sea World? No, most likely not. But will we go back to Disneyland? Heck yes! In fact the kids want to go next year and take the grandparents. I loved every second we were there. Even the long lines.

2 responses to “The land of magic”