I’ve been planning this blog post for months, except I never thought I’d be writing it tonight. I thought next week, on July 11th, I’d be so high with a victory rush that my post would be a gushing of pride and, that, victory.
Argentina lost to Germany today. Let me rephrase.
No, we didn’t lose. They bulldozed us, beat us to the ground. Made us go through an agony of 90 + minutes with their 4-0 victory.
4-0
The dream of being the world champions was so close, so real, I, like I’m sure the other 40 million Argentines in the world, would go to bed every night fantasizing about seeing that image on the TV screen. The 23 guys and Diego lifting the cup and going back home victorious. When the dream is so close, so possible, it hurts like death when it comes to an end.
We’ve been through this before. Against Germany too. Those Germans. Those implacable Germans. But it still hurts. Every time.
When the clock showed there were only 20 minutes left in the game, and we were 3 down, I looked at my sobbing 9 year old son and, as gently as I could, I prepared him. “We’re going to lose. But we’ll be OK.”
He sobbed even harder.
Only last week my precious boy was crying of happiness. An event that made me prouder than Argentina’s goal. I told my son, “Remember this is the first time you cry for the albiceleste.”
Our national team has given us so many reasons to celebrate. But we’ve also cried with them. So many times. With Diego, especially.
Diego, our hero, whom so many people hate and so many others idolize. The Napoli people still thank him for the two scudetti Diego won for them, and the Argentines, oh the Argentines! How many times have I shouted goal because of him.
Many people can’t understand why we Argentines love him in spite of his drug problems, the times he was so out of control we thought we’d kill himself, and all his craziness.
We love him because he showed us that it IS possible for a boy from the slums to rise to the top of the world and be the best. So good, his goal against England in ’86 is regarded as the goal of the century. We love him because 4 short years after the ill-fated Malvinas War, our country stood proudly against the English, and we beat them. With the “Hand of God” and that “Goal of the Century.”
In Italy ’90, Diego, with a swollen ankle the size of his neck, still played EVERY game and took a mediocre team to the final. Against Germany. Again. We lost. The image of our hero, crying as he received a despised second place medal is etched in my eyes and my heart. I was 12. I’ll never forget that July 8th, 1990.
And now, we had another incredible chance. With Lionel Messi, the current best player of the world. A team made up of so much talent, Diego had a hard time choosing whom to take to the cup.
It wasn’t meant to be. Excuses. I could find a million. The truth is, we’re out and we’ll have to wait four more years to try again.
Why is futbol so intoxicating? So special that whole countries go insane when the ball crosses the goal line?
It’s not just a sport. Our players fight for National Honor. They’re the proof that a person can change history, that even if the economy is still decrepit, if the politicians still lie and steal from the people, if the First World countries always use the Poor Ones as peons in their power struggles, we are good at something. When Messi scores a goal, each Argentine, man or woman, adult or child, feels they’re there on the field. Celebrating. And when we see Diego cry! A god crying! We cry too.
That game sure has something special if a little boy who’s never been to Argentina can toss nervously at night, anxious for the game, and then the next day cry of disappointment when he realizes no matter how much he prays, the team won’t make it. And later that night, still with the blue and white jersey on, go out and face the world, chin up, looking everyone in the eye, because we have nothing to be ashamed of. 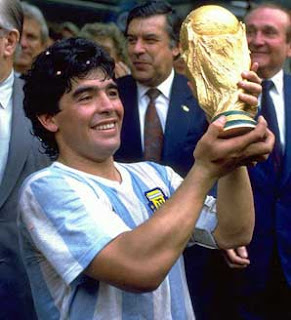