Do you want to know what Jeff was doing last week?
He was fishing in Alaska.
He showed me a video of him fishing on one side of the river, and a brown bear, watching him from the other shore.
And yesterday? Where was he?
He was skydiving.
I didn’t want him to go. I was so scared he’d be the one case in 1, 000, 000, 000, 000, 000 whose parachute doesn’t open. Being a widow at the age of 32? No, thanks.
But there was no way he’d not do it. Poor Jeff, I gave him such a hard time.
But he went to Moab, jumped from an airplane, and he lived to tell the tale. He looks ecstatic in all the pictures.
I must confess: I envy him a little. No, not the fishing trip, but the courage and faith to jump from a plane and trust that a few yards of fabric will give him wings to fly and then, land him safe and sound.
This weekend I’ll be at the Writers’ Retreat hosted by Fire Petal Bookstore. Agent Lauren Macleod will be there, and by now, she must have read the first chapter of Southern Cross. I’m so anxious to know what she thought if it!
But most of all, I’m anxious about leaving Jeff and the kids for two nights. I printed out schedules and instructions, the address and schedule for the conference, left El Cangri’s medicine ready in case he gets stung by a bee (I pray to all the angels of heaven that he won’t).
Let’s see if four kids are a good match for a brown bear and jumping off a plane.
I’ll let you know Monday if we all survive the weekend 🙂 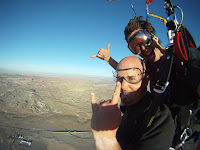 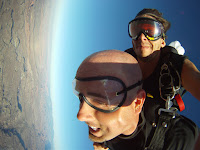 Do these four angels look more dangerous than a brown bear?
Don’t let the smiles fool you…