LDStorymakers 2011 and my winner first chapter

Last week I had the opportunity to attend the LDStorymakers 2011 writers’ conference. If you attend one conference a year, this is the one you should choose. The tuition was very affordable, with options for people who could only attend one day or all three.

I have a wonderful critique group that I treasure. My partners are all incredibly talented, supportive, and knowledgeable. They’re usually the ones who read the earlier drafts of my books, and I trust them to offer helpful but kind criticism. Sometimes it’s also very helpful to have people whom you don’t know and don’t know you read your work too. During bootcamp and the Publication Primer classes, all my companions offered invaluable advice, and even if in a couple of instances I didn’t agree with something right away, as the days went by, I recalled their words and read their comments and realized that they might be right! Or I saw my chapter from another perspective. That, is gold for the writers’ mind.

Due to some scheduling conflicts, I wasn’t able to attend Larry Brooks’ class(yes, the guy who writes storyfix.com, the best writers’ reference blog out there, in my opinion), but he gave the keynote address. Larry is a pragmatic kind of guy but an advocate for being a prepared writer, or a writer with a plan, even if it’s only just in your mind. I loved that he said we all have the tools to succeed as writers, we just need to learn the craft.

I also had the chance to pitch agent Becca Stumpf, from the Prospect Agency. I wasn’t dying of anxiety because right before my pitch appointment, I attended a class by her, and she’s a lovely person. She was very enthusiastic about my project, and made the ten minutes pass by like a breeze.

On Saturday during lunch, the first chapter contest winners were announced. I really didn’t have a lot of hope. But I’m a Saggitarius, I can’t help being optimistic 🙂 so every time I thought about the announcement, I had butterflies in my stomach.

They started by announcing fifth place. There were so many entries for YA Fiction. My name wasn’t in fifth, fourth, third, and then for the second place, they announced A BLIND EYE, from none other than my dear friend Julie Daines! I was so happy I teared up. Last year she won first place. So when they announced her name, I told her, “You’re the queen of first chapters.”
And then, I saw my title on the screen, SOUTHERN CROSS, and my name right beneath it. They announced my chapter as the winner. Let me tell you, I totally knew what Harry Potter was feeling on the way to professor Dumbledore when his name came out of the Globet of Fire!

I don’t remember how I made it all the way to the podium. My friend Julie gave me a hug, and I cried a little. In fact, when I told my brother later on the phone, the first thing he asked was “Did you cry?”

The best part of all was coming home and finding this from my kids: 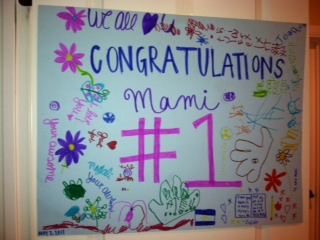 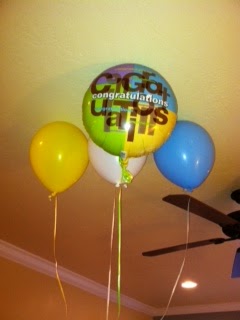 And later my friend Julie and her husband brought me more ballons: 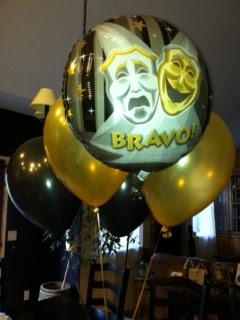 And I promise I’ve been trying not to stare at this certificate all week (I don’t know how to turn the pic on this program!) 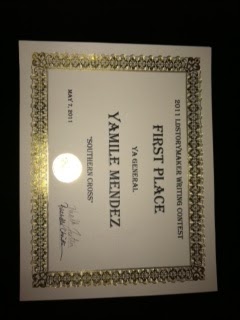 Most of all, I have hope again for this story. I only queried a few agents, but without any good response. This week, I re-wrote my query letter and I’m working on a few more revisions before I send SOUTHERN CROSS out into the world. If you’re interested in reading my first chapter, it’s posted on the LDStorymakers site for a month. Click here. Look for Youth Fiction (all other genres besides Fantasy) and you’ll see my name, Yamile Mendez. It’s still there, so I guess it’s true I won 🙂

4 responses to “LDStorymakers 2011 and my winner first chapter”