THIS is why I love it so much

Today Barcelona added another trophy to their already cluttered collection. I celebrated each goal (Iniesta1, Messi 2) and protested after each foul by the Real Madrid players in the same way as if I were at the stadium. Good thing my husband’s out of town 🙂 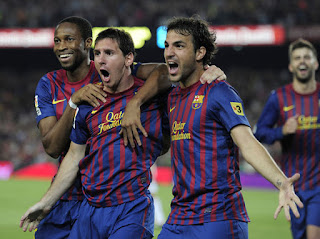 I’m still in a daze for finally seeing Cesc Fabregas wearing the blaugrana jersey of the first team (doesn’t he look awesome? He’s the first from the right). My happiness turned into outrage when Marcelo tackled Cesc at the end of the game.

The fight that followed the infraction for which a red wasn’t enough, and Ozil’s and Villa’s red cards for punching each other are nothing compared to what when Real Madrid’s coach Jose Mourinho did. He attacked the Barcelona assistant coach, Vilanova, and then laughed about it. 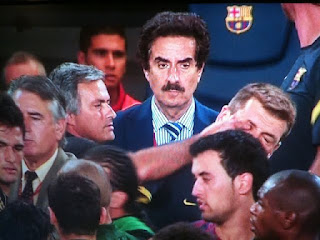 In spite of all of that, my favorite part, and the reason I love futbol so much, is shown at the 1 minute mark of the following video. Gonzalo Higuain, Real Madrid 20, is outraged, and fellow Argentine Javier Mascherano tries to calm him down. Mascherano is Barcelona’s 14. The thing that I love the most is that in spite of belonging to rival teams, the Montegue and Capulets of the futbol world, these two guys belong to a team that takes precedence over the team they work at. They’re both part of the Argentine National team and they look after one another. A few seconds into the video, I saw Barcelona’s Dani Alves comforting fellow Brazilian, the Merengue Kaka. Same thing. They’re Brazilians and friends first. The rivalry comes last.

Of course, someone may argue that in both teams that are several Spanish National team players that hate each other, but that’s another argument. For the most part, the futbol players in this match avoided aggression and protected their friends, disregarding the jersey they were wearing at the time.

Futbol is passion but it’s also a brotherhood. And I love it.