The last couple of weeks haven’t been good for us, Barça fans. We lost the first game against Chelsea for the Champions League Semi-final; we lost El Clasico and almost all hopes for La Liga to Real Madrid, and we tied on the second game against Chelsea, losing our spot on the finals. Messi missed a penalty kick (he’s human after all), and the tie left us a taste of defeat. Last Friday came the last straw, when I woke up to the sad news of Pep Guardiola’s decision of resigning as the coach of the first team.

I could see it coming, but I’m a Saggitarious! I always keep a glimmer of hope (proof is, I still think we still have a shot at La Liga 🙂

Pep cited exhaustion as the main reason behind his decision. He gave his all to the team in these last four wonderful years. He’s empty now. He has nothing left to give. Like someone mentioned on twitter, the guy aged ten years in the last four!

I just wanted to say thank you, Pep, for the leadership. Thank you for the example of ultimate sportsmanship. I hope that throughout their lives, my children may have the priviledge of having leaders such as Guardiola, who respect their principles beyond any score or title, who never stop demanding but the best, who believe there’s always one more goal to achieve.

Pep, you have inspired me beyond words. And I will miss you every weekend, directing and comandeering the best futbol team that has ever existed. Because of course, Barça without Xavi and Iniesta, Puyo and Messi would never be the same. Barcelona without Pep won’t be the same, but life continues. The mark of the leader is more noticeable when they’re gone. I know Pep’s legacy will extend for years, if not ever. I’ll certainly remember him always. 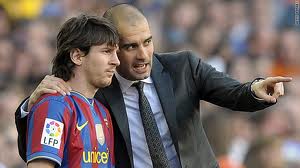 Best Strategist Ever. He knew where the magic was needed. 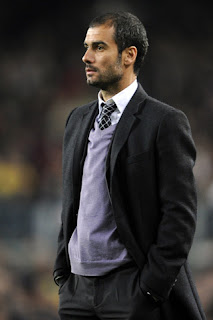 No, he’s not a top model. He’s The Gentleman of the most beautiful game of the world.