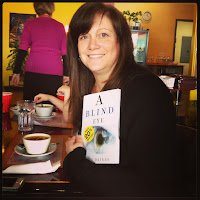 This Valentine’s Day feels like a mini-Thanksgiving for me. Maybe it’s because I’m surrounded by so many wonderful people in my life that I thank Heavenly Father for them at all times. Jeff, the kids, my Baby Hulk, who’s so healthy and peaceful and beautiful, my parents. I’m blessed with many friends that have enriched my life in one way or another. One of such friends is Julie Daines. We’ve known each other for a while, but it wasn’t until we were together in our Writers’ group, The Sharks and Pebbles, that we became friends. Let me tell you, when a person reads your first drafts and still encourages you to keep on writing, you hold on to that friend, okay? She, along with our other writer companions, has glimpsed into the depths of my soul and still wants to be my friend. How cool is that?

Julie’s book, A Blind Eye, just came out a week ago and it’s already sold out in Amazon. It’s not only a great story of redemption and forgiveness, but it’s also fun, engaging and so well written. I read an early draft of her book, and it was already awesome and flawless. I don’t know how she comes up with these stories, but she’s a genius.

A Blind Eye is about Christian, a snarky, good hearted boy, who’s desperate for his father to notice him. He’s so desperate he runs away from home, only to find a stowaway in her car. Pink haired, quick witted Scarlet is also running away–from someone who kidnapped her in London and wants to silence her about her premonitory dreams. She’s blind, but she sees far more than what it’s obvious to the eye. When she dreams about her own and Christian’s death, the two race against the clock to find the reason behind her kidnapping and in the meantime, see the truth that is hidden in plain sight.

I’m giving away a signed copy of A Blind Eye to one lucky person. All you have to do is leave a comment before Saturday night at midnight. Spread the word as happy Valentine’s day!!!

One response to “A Blind Eye”