Desperate times call for desperate actions. I wanted a book so I went to WalMart.

House of Hades, by Rick Riordan, came out today. I don’t think I ever recovered from the terrible cliffhanger at the end of The Mark of Athena. I know my oldest child never did. Like with most important books, I pre-ordered my copy from Amazon. Like it always happens, Amazon shipped out the book today. It won’t even be here until Thursday. What are two more days after waiting a year in agony, you may ask? Two days are eternity and torture and cruelty. Snow at the end of September.
So like every year, I made my annual trip to WalMart. There are many things I hate about WalMart, but if I’m being fair, I have to acknowledge that in matters of life and death, as in, I have to have that book now, they’ve never disappointed.
I arrived in the store and the first thing I saw was a display of House of Hades. Empty display. I frantically searched the store. All the displays were empty! Amidst the panic attack that was now choking me, I had the cheerful, ray-of-sunshine thought that all the empty shelves meant people read. People love books. Other people like me have to have the newest Percy Jackson right now. Still, I had no book and my trip to WalMart had been for nothing. I grabbed shampoo and a few other things, because I was there and I had a list. None of the things I grabbed were on my list. To make matters worse, there were two items I did have on my list that, of course, I didn’t buy.
I passed the electronics section and I got distracted for a second. There was a FIFA 14 display with a picture of Messi. The display was empty. All this means was that people also love video games. And Leo Messi, right? If they love Messi, they love Rosario, because, hey, he was born there. And so was I! Therefore, they love me.
I felt loved then, but still panicky.
Then I saw it: a little rackety display with copies and copies of House of Hades. I almost grabbed two. One for my son and one for me, until I remembered that hey, amazon already sent me my book. Right on queue, a text message came in, announcing that my book had been shipped and should arrive by Thursday at 8 PM.
Really Amazon? Thursday by 8 PM? By then, you better send me the next book, because my son and I will already be weeping and gnashing our teeth over the cliffhanger that’s sure to come! 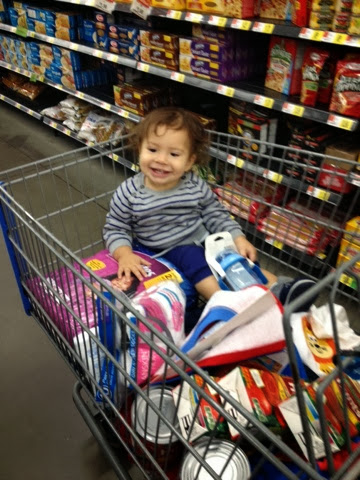 Crazy WalMart trip. Baby Hulk learned how to climb out of the cart. 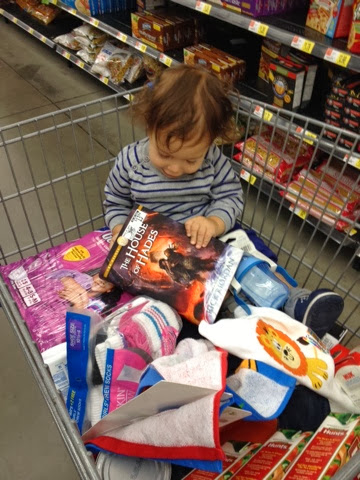 Even he is so excited about the book! See also all the other stuff I got? None was on my list! 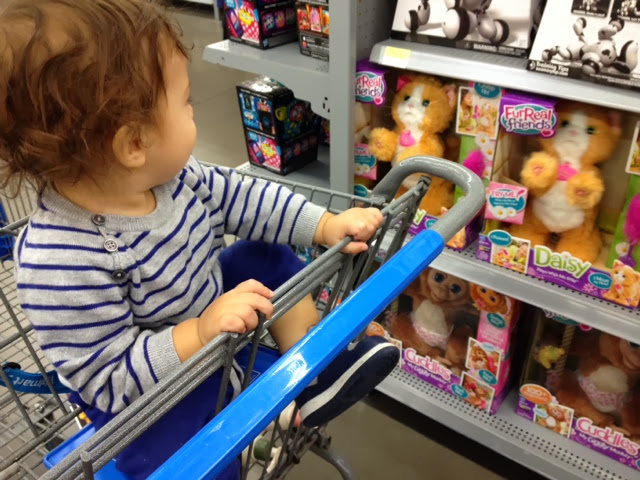 Here Baby Hulk is learning WalMart is a “special” place. He wasn’t sure about the meowing cats. At first, he wanted to hug one, because he’s a hugger. But when the “kitten” moved its legs and pushed him away? I thought he was going to run away! Which would explain his climbing out of the cart, now that I think about it. Also, notice that cart is empty at this point. All this means is that all those empty displays? They were probably part of Walmart’s  strategy to get people like me to buy stuff we don’t need. Tricky, tricky, tricky WalMart!