I love bread. That’s the main reason I could never do a paleo or Arkins diet. I grew up in a family for whom a meal wasn’t a meal without bread. Oh Argentine caserito and mignones, how much I miss you! There’s nothing like you where I live! My favorite part of going To Puerto Rico? Pan sobao. The best of Barcelona and Paris? No, it’s not cream Catalana or macaroons. It’s the bread, of course.

Bread and butter. There’s nothing more delicious.
When my third child developed a gluten intolerance, I had no choice but to go gluten free too. The whole family did.  It’s easier to avoid an allergen if it’s not in the house, right? But I missed my carbs-rich comfort food! I experimented with all kinds of grains, and little by little, I did get used to eating a variety of grains. Teff, quinoa, spelt. We all became friends.
When my son’s sensitivities decreased, I introduced wheat in our diet again. I continued using the grains I had discovered though, and most of the time, I make bread or cookies with whole wheat I grind in my beloved Nutrimill.
Christmas is not Christmas without the baking and kneading, right? Especially in the northern hemisphere, where we are reaching the darkest day of the year. Today is the feat St Lucia. Sweden celebrates its midwinter Festival of Lights by honoring St Lucia. When I started introducing the Waldorf approach of raising a family, I found a lot of celebrations and traditions from all over the world that we adopted. St Lucia is one of them. My Princess Peach still calls it St Chulia’s day (instead of Lucia) and I don’t correct her because her mispronunciation is so darn cute! Well, according to tradition, a girl with a crown of candles wakes up the family, bringing the light with her. I’m usually the one waking up the family in the morning, and since I don’t want to walk around with a crown of candles on my head, I make sure I at least bake saffron St Lucia buns every year. Yesterday my Princess Peach was home and she wanted to help make the buns. I was happy to have her help. I set out all the ingredients. Instead of white flour though, I used whole wheat. Well, the first time I scalded the yeast and had to start all over. I almost cried over the wasted saffron. I had used my very last envelope of powdered saffron I brought from Barcelona last February. I started again, taking care not to waste any more of the precious spice. By then I was very pressed for time. My writers group was meeting that night and I had just received a text from a friend reminding me that Princess Swan had Irish dance rehearsals–an hour away from home. I tried to hurry as much as I could. But in cooking there’s no rushing the process. The dough was crumbly and heavy as a brick. The dough would not rise. I let it rest for HOURS, to Princess Peach’s agony and despair. After writers group, and after I put the kids in bed, I rolled up the dough and baked it. The rolls smelled wonderful but they were super heavy. I remembered last year’s rolls with such longing!
This morning, determined to win the battle against whatever it was that was blocking my St Lucia’s buns baking ability, I mixed the dough again. I took care not to scald the yeast. I used some more precious saffron, and … White flour. They turned out okay this time. Because sometimes, even though white flour is basically a nonfood, it’s still delicious and wonderful and comforting and light.
Sometimes it’s okay to use white flour. That’s the lesson I learned today.
Here’s a picture of the wonderful white flour, sugar dusted buns and a sad looking, burned whole wheat bun.
And here’s a link that tells a little about St Lucia’s festival:
http://en.m.wikipedia.org/wiki/Saint_Lucy’s_Day 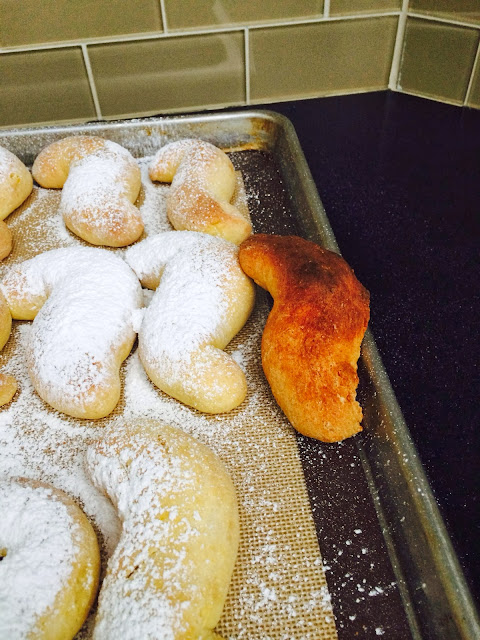 Interested in making the rolls? Maybe you’ll have better luck than me. Here’s a link to the recipe. Saffron rolls are delicious! Even without raisins.
http://www.food.com/recipe/saint-lucia-buns-lussekatter-saffron-buns-43784
What holiday traditions does your family have in preparation for Christmas? Share away!

One response to “Sometimes it’s okay to use white flour”