It’s not a Hogwart’s letter or an invitation to Camp Half Blood, but it’s the best next thing 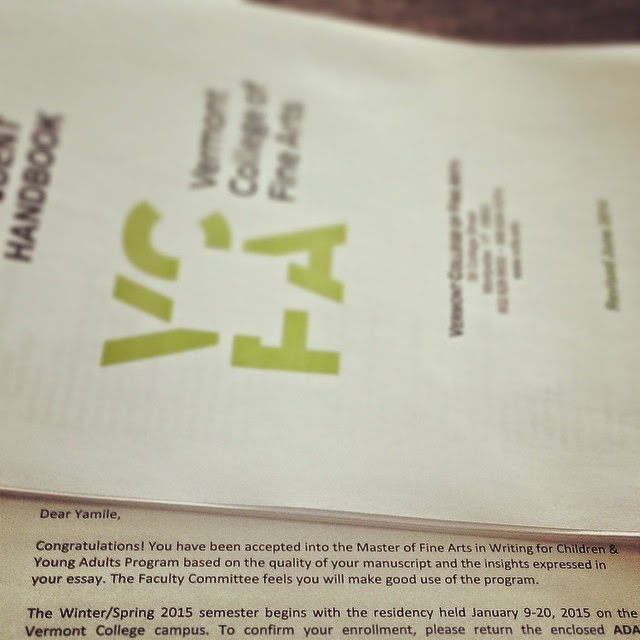 It’s September, and yesterday the Hogwarts Express left Platform 9 3/4 without me. Again. Although this summer has been pretty eventful (Coco attacked by a pitbull, Princess Peach spraining her foot, and Swan having an emergency appendectomy on Sunday night), I still haven’t received my invitation to attend Camp Half Blood. I swear I’m Poseidon’s offspring, and enough people can attest that I can be a major witch somedays 😉

Who cares that I’m too old for either Hogwarts or Camp-Half Blood? I’m still eleven in my heart. But last Saturday, I received the best next thing besides an invitation to either school or camp. I got my letter of admission from The Vermont College, specifically for the Master In Fine Arts Programs In Writing for Children and Young Adults.

I hugged that giant envelope against my chest, and ran to my family who was playing soccer outside. I wish I could encapsulate the feeling of the late afternoon sun shining on me, Jeff and the kids, as we all celebrated this victory. The next day, when I was sitting in the surgery waiting room at Primary Children’s Hospital, waiting to hear news on my daughter, I drew on this feeling. There was no need to encapsulate it after all. It’s in my memory forever. I’m sure the future will bring days in which I’ll wonder why I ever thought going back to school with five little kids and a husband with a very demanding job was a good idea, but for now, I’m ecstatic with my letter and the promise of adventure in the words “Congratulations! You have been accepted.”  Vermont College of Fine Arts, here I come!

5 responses to “It’s not a Hogwart’s letter or an invitation to Camp Half Blood, but it’s the best next thing”